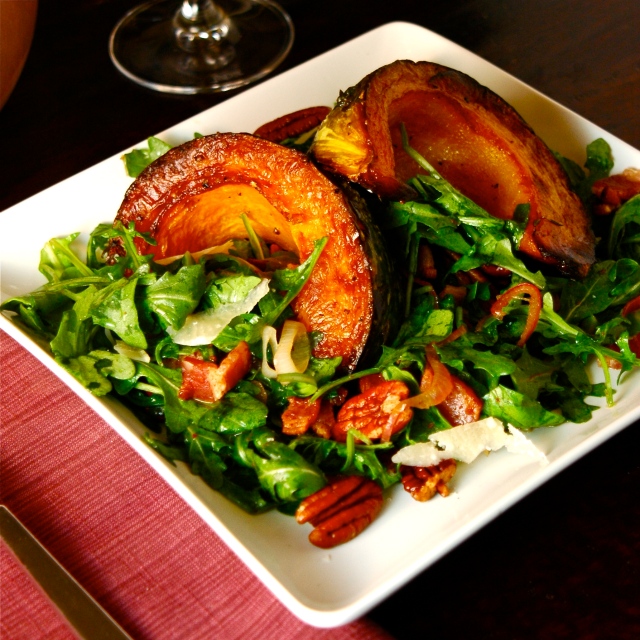 Kabochas are a Japanese variety of winter squash (most of the crop here in California gets exported to Japan, though they’ve enjoyed an uptick in popularity), squat green pumpkins that average between 2-3 pounds. They’re wonderfully sweet and yielding when roasted, with a texture that’s more akin to roasted sweet potatoes (my wintertime stalwart) than fibrous pumpkin. They’re also the star of this satisfying salad of peppery greens (tamed by a rich vinaigrette of sherry vinegar and bacon drippings) that’s tossed with toasted pecans, shallots, a flurry of nutty grated Manchego and golden wedges of squash. Yes, please.

Add a hunk of bread and some wine and you already have a proper meal, but if you’re entertaining, follow it with an easy-to-fix main course like cedar-grilled salmon (provided you live somewhere where it’s feasible to cook outside this time of year) and an almond tart or a batch of fudgy brownies for dessert.

Preheat the oven to 375 degrees. Toast the pecans on a baking sheet until fragrant, about 10 minutes. Toss with a pinch of salt and set aside.

Meanwhile, cut the squash into lengthwise wedges (about 2″ thick through the thickest part). Scoop out and discard the seeds. Toss with 1/4 C olive oil, thyme, a few grindings of pepper and a generous seasoning of salt. When the pecans are done toasting, warm the oven to 425 degrees. Once the oven’s at temperature, roast the squash, flipping halfway through, until tender when prodded with a fork, about 30 minutes.

Meanwhile, slice the shallots and set aside. Stack the bacon slices and cut lengthwise, then cut crosswise into little rectangles, about 1/2″ wide. Wash the greens and set aside in a large salad bowl. In a small bowl, whisk together 3 tablespoons of sherry vinegar, 2 tablespoons olive oil and 1/4 tsp salt. Set aside.

In a large sauté pan or dutch oven, cook the bacon over medium-high heat, stirring occasionally until it browns and renders out its fat. (If your squash is still a ways off from being ready, remove the bacon with a slotted spoon to a towel-lined plate to keep from overcooking; it’s best with a little chew). Lower the heat to medium and stir in the shallots. Take off the heat and stir in the vinaigrette, scraping up any browned bits at the bottom. Swirl together with a pinch of pepper and about 1/4 tsp of salt. Toss the contents of the pan, including the bacon, with the greens and pecans; add the squash and transfer to individual plates or a platter and generously shave the cheese over top with a vegetable peeler. Serve immediately.

Note: the original recipe calls for peeling the squash before roasting, which is a royal pain. I think it’s easier just to eat around the skin as you might with other roasted squash. Also, if it’s from a good source, bacon can be a little fattier in the winter months; if you have more than a few tablespoons of fat left in the pan after cooking the bacon, spoon off the excess and reserve for another use.