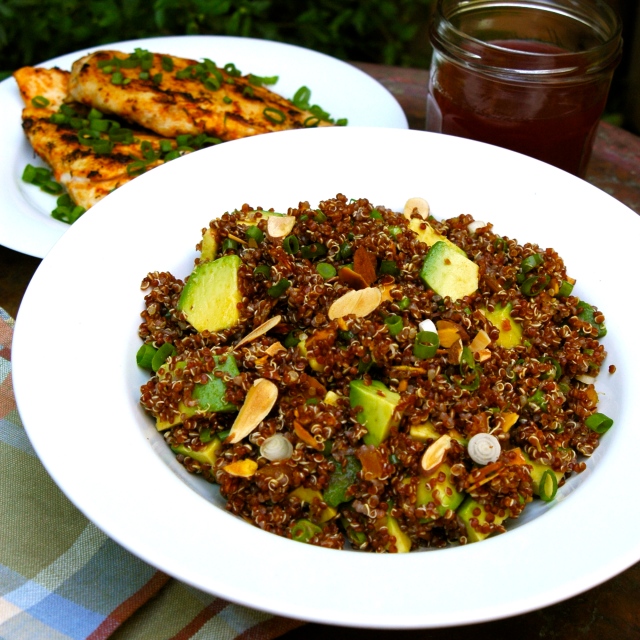 The Incas revered quinoa (“mother grain” in their ancient language, pronounced “keen-wah” in ours) as sacred, and it served as a staple food until Spanish missionaries razed the idolatrous crops in the 16th century. (Take out a protein-packed superfood, throw in a little smallpox and modern warfare, and you have yourself the end of an empire.) Quinoa is famous as a nutritional powerhouse (protein, iron, magnesium, B vitamins) but it also boasts a pleasant texture (somehow springy, fluffy, tender and firm all at once) and a wholesome, nutty flavor.

My Aunt Kathy forwarded me this satisfying  recipe (she served it with salmon and asparagus for an al fresco family dinner in DC last month) and I was pleased, if unsurprised, to discover it was developed by Deborah Madison, whose Vegetarian Cooking for Everyone I’ve dog-eared and splattered to near ruin in the ten years I’ve had it. (It was, now that I think of it, a Christmas present from Kathy.) I’d forgotten how ridiculously easy quinoa is to prepare – fifteen minutes on the stove, fluff with a fork, and it’s ready. Madison tosses the grains (they’re seeds, technically, but we don’t need to get overly scientific today) with a bright, piquant dressing and creamy hunks of avocado. Serve as a main or a side dish at room temperature, excellent for picnics and parties alike.

In a medium (2-qt) saucepan, bring the quinoa, 1/2 tsp salt and 2 cups of water to a boil over high heat; cover, reduce the heat to low and simmer until the water is absorbed, about 10-15 minutes. (The germ will separate as it cooks, a squiggly spiral in the center and around each seed.) Fluff with a fork and spread out on a rimmed baking sheet to cool to room temperature.

Note: most of the bitter saponin (quinoa’s natural defense against insects and birds) that coats each seed is removed in harvesting and processing, but you’ll still want to rinse your quinoa well before cooking, just in case.

4 Responses to Quinoa Salad with Avocado